EBF Files is a solution that relies on the following components: 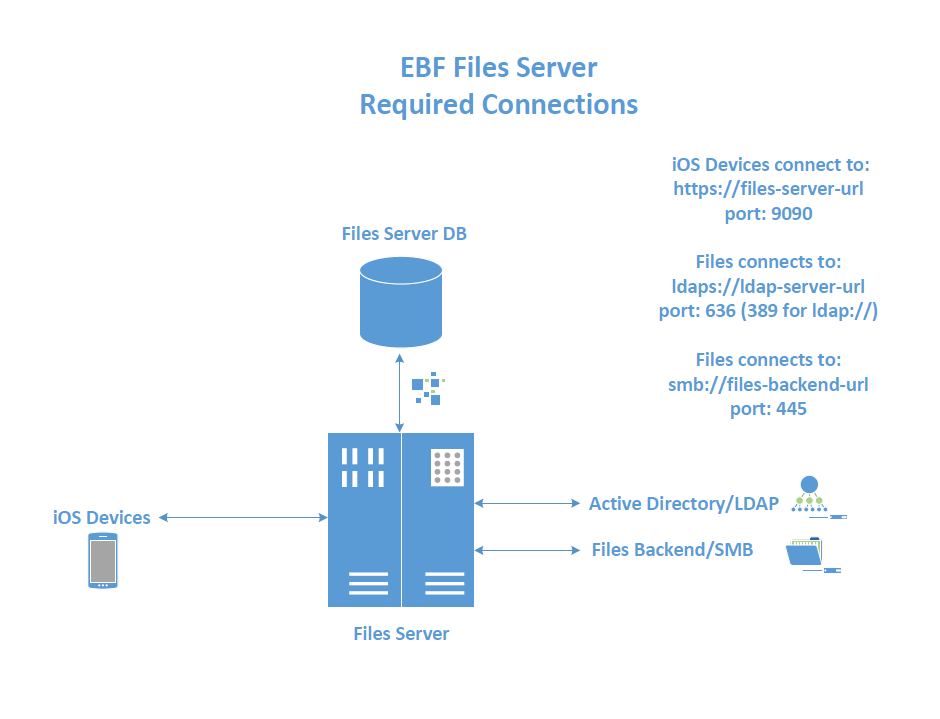 Additionally it is possible to combine EBF Files with proper tunnels and authorization for a more secure access to the files without manipulation.

The EBF Files app is the client on the Android / iOS device where the files are being requested from. The app is used to request, receive, view, edit, upload and also offline-store files.

The UEM System is the Device Management system which is needed for multiple features. The system can be used for simple deployment of the app to all devices, but also can be used to combine EBF Files with a tunnel and specific configurations for server access.

The EBF Files Admin Portal is a configuration point for file server connections and mobile devices.

The File Server is the directory with the needed folders, references and associated rights.

The AD is the directory for users, groups and associated access rights.

EBF Files uses a database to store all configurations for organizations, domains and containers.

Starting from app version 2.0.0 EBF Files can also be used in a serverless mode. This means, the app will work standalone and all configuration be provided via AppConfig parameters. Limitations are, that serverless mode does not support SMB containers, but only OneDrive and Sharepoint data sources.

For serverless mode you do not need a Files Server, an Active Directory or a database, just depending on a UEM system for the app parameters.

Was this article useful?

Still stuck? How can we help?

How can we help?